This MAY concern you. . .maybe it OUGHT to!

A member of the House of Representatives, presumably “representing” constituents including people of all faiths and no faith, has sent a Bible to every member of Congress.

Here it is, on official Congressional letterhead: 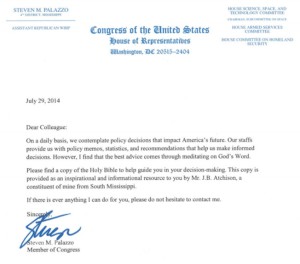 How does it feel knowing a member of the United States Congress is spending time and money on this?

How does it feel knowing that an elected representative, sitting on powerful committees in Congress, feels that the Bible (“God’s Word”) is the “best advice” for governmental decision-making?

We have a serious educational gap in this country.

And, yes, this kind of Faith-Proofing in Public makes me angry. . .and worried for the future of Good Decisions! 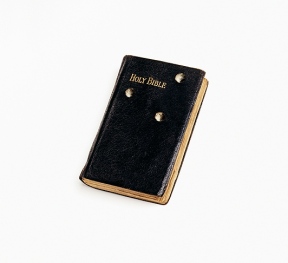 O-HI-O man gets shot at by three people but, miracle of miracles!, his pocket bible stopped the bullets. . .

The story of a biblical miracle that saved a man’s life from blazing bullets has turned out to be a myth, police in Ohio said.
The account by a public transit bus driver who said a devotional Bible carried in his chest pocket stopped two shots fired at his heart isn’t true, said Dayton Police Chief Richard Biehl on Wednesday.
“Based on the evidence, this crime did not occur as reported,” he told CNN affiliate WDTN.

A Rational Call to Reasonable Muslims

What World will She Discover?

from the Iranian Atheist

Reasonable people across the globe, with faith or without faith, should be paying attention to this “muezzin call” to stop, think and try creative cooperation.

What is the alternative?  Look around.

What is Religion and Religion’s Books, offering to the Next Generation?

Watch what you’re pointing there, pal

Alright, I have no idea if Dame Maggie Smith actually said this, but a friend passed it along:

It’s a perfectly fine thing for one to have and take pride in,

but when one takes it out and waves it in my face,

we have a problem!”

Who cares if Maggie said it or not.

One has to keep a sense of humor with all these so-serious sacred scriptures!

Noah and the Incredible Floating Zoo

I still find it hard to see how some ancient stories continue to inspire in our modern world.  This is especially true with age-old tales such as Noah and his floating zoo.  Since most people, and perhaps most Jews, Christians and Muslims, never read these stories after childhood, I urge a re-reading.  Really!  A Secular Chaplain is inviting you to read the story of Noah again, or for the first time.  Seriously, read it.

But be careful; be warned:  Rather than inspiring faith, this story may actually do the opposite.

Hint:  Pay attention to the Divine Zoo Keeper. . .and Keep a close Eye on the Sky!

What prompts this invitation is of course the new movie, Noah, now flooding our screens (sorry) and already raising storms of controversy that threaten to drown out reasonable conversation as only these tales can do (sorry, and sorry again).

I may rent the movie eventually, but I’ve read the book (The Book) and just read the story again.

I see that Russell Crowe and his beautiful mind (with Jennifer Connelly’s mind, again!) is starring–crows being one of the “clean” animals saved on the ark.  I’m amused by the producer’s attempt at a disclaimer on the “official site”:

The film is inspired by the story of Noah. While artistic license has been taken, we believe that this film is true to the essence, values and integrity of a story that is a cornerstone of faith for millions of people worldwide. The biblical story of Noah can be found in the book of Genesis.

A quick scan of that essence, those values and the integrity of this “cornerstone of faith for millions” (whoa, the drama over the drama is quite. . .dramatic!) is a revelation. . .well, it’s not pretty.

Let us turn to Genesis (soon to be Genesis-ide), chapters 5 through 10.  Now, pay attention: for a story to take up to 6 chapters in Sacred Scripture is exceptional!  Six chapters of God’s Holy Word centering on One Person and One Main Story:  Noah.

Highlights (since most of you won’t really go read the story. . .I know, I know):

-He’s “righteous” and “walks with God” (though we aren’t told what that means–where do they walk?)

-The rest of the Brand New World just created by the Lord of the Universe is suddenly “wicked” and “evil” and “violent.”  The “thoughts of their hearts” were inclined to “evil.”  (this isn’t explained either. . .do hearts have “thoughts”?)

–God is sorry (the original says that God “repents”–He’s VERY Sorry). . .sorry He made the earth and the people and everything

–Rather than FIX this mess, God decides to “destroy” and “blot out”. . . “Everything shall DIE!”  (the first pre-meditated Genocide in history)

-Noah is told to build a boat with divine blueprints, get his family on board, gather up all birds and animals and beetles, male and female. . .it starts to RAIN.

–FLOOD!  Rains for 40 days and nights. . .and the water covers the earth for a YEAR!  (a long time to be on a boat with all those animals. . .let alone your family!  Remember, no books, no television, no iPad, no phones!  This is NOT a cruise ship!)

-A CROW is sent out first (actually a Raven, but appropriately like a crow, a Crowe).  Then the dove story. . .etc.

-First thing Noah does after saving all those animals?  Rounds up the best ones and. . .Burns Them!  Yes, that’s right, “offers them up as burnt offerings” to the Lord.  You would think God would NOT be happy, but God actually LIKES the smell of barbecue!  Odd.

-Noah and his family are “blessed” and told to make lots of family (remember, these are brothers and sisters and brother’s wives and daughters, etc. . . .let’s not think about that, ok?  Well, YES, let’s think about it because it’s what the holy book is telling us, right?)

-Finally, for this secular summary, God puts His “bow” in the sky (why He has a bow isn’t explained–target practice with arrows?).  But WHY does God put a Rainbow in the Sky?  To remind People of Faith that He won’t destroy the earth again?  To do something Pretty we can take pictures of and say, Wow, that’s Beautiful?

No.  God puts His bow in the sky to Remind HIM, to remind HIMSELF, never again to flood the earth and destroy all life!  Think about that.  No, better not!

Here’s the God that the Story of Noah presents:

-Feels Real Bad about His Mess, but the “best option” He can think of is:  KILL Everything that Lives! (now, think here:  He is unable or unwilling to find a better option. . . can YOU or I think of a Better Option?)

-Loves the smell of barbecued endangered species! (“I admit I’m powerless over that intoxicating Grilled Meat!”)

Ok, so THIS Story teaches values and integrity, standing as  a cornerstone of faith for millions?

The Story of Noah

(final note:  some of my Liberal Progressive Believer Friends wave this off as “a Myth.”  Ok, I learned that way back in seminary too.  But it’s in The Book; this Myth is in Scripture.  What do you DO with it?  Do you agree with the “values” in this?  Do you believe in the God presented in this story?  If not, and you remove these six chapters from “inspired scripture,” what’s next?  Why would someone even take seriously a book, “God’s Book,” that presents a story like this?  You can’t say this is “only the old testament” because the “new” testament has as much if not more mythology.  And, honestly now, isn’t most Theology actually based on Mythology?  If you admit that, what exactly is “Faith”?)

Blast at Church in Harlem

But those who DO survive disasters are sure glad that “God’s Grace” saved them.

Not sure why that grace didn’t work for the dead.

Yet, thank God The Bible was saved!

“You think about what happened to those people and you can’t help but believe that we’re still here by the grace of God,” she said.

“Near the blast site, the planned prayer gathering went on after Mr. Perez was taken away in the ambulance. The Rev. Vernon Williams, who is not a member of the Spanish Christian Church but participated in the gathering, held the Bible in his hands. “The word is preserved,” he shouted.

The Natural Bible
Blog at WordPress.com.